Online gaming has become a new thing now. From Pubg to Fortnite, you will find 8 out of 10 people playing games on PC. But to play games daily, one needs the best quality laptops, … Online gaming has become a new thing now. From Pubg to Fortnite, you will find 8 out of 10 people playing games on PC. But to play games daily, one needs the best quality laptops, which serve diverse gamers. Recently, Dell launched four new gaming laptops in India, which are targeted mostly at gamers. The company has launched the laptops in Alienware and G series.

Recently, Raj Kumar Rishi, who is Managing Director for Consumer & Small Businesses and Vice President of Dell Technologies, expressed his excitement about the new range of laptops. He stated that gaming has become immersive, and today’s gamers are looking for diversity in tools. He added that in their new laptops, they are looking forward to getting good feedback and great customer response. Here we have listed the price, features, and specifications of each laptop in detail.

From pro game players to casual players, anybody can buy these new laptops. After launching the new gaming laptops, gamers cannot help themselves from checking out the new features of the laptops. Sources reveal that Dell has launched the M15 R3 model in the Alienware series, and G3 15 (3500), the G5 15 (5500), and the G5 15 SE (5505) in the new G series. These four models contain powerful hardware along with 10th Gen Intel CPUs. Besides, the pricing of each laptop starts with 73,990 INR.

As per Dell, among their three new laptops of G series, G5 15 SE is an interesting model. Apart from that, these four laptops will be easily available online on Flipkart, Amazon, and other popular websites. You can also find them at your nearby Dell Exclusive Stores, and other popular outlets. Without further ado, let’s jump straight into the features, prices, and specifications of the new gaming laptops.

You can carry the laptop anywhere you want because this model comes with a thin body, which is 21.6mm. The cost of this laptop is 73,990 INR.

This new laptop was earlier unveiled at CES 2020. Apart from that, G5 15 SE is the first G series laptop to include the AMD Ryzen 4000 H-Series Mobile Processors.

It offers up to 16-threads and 8-cores. Also, these processors are paired with AMD Radeon RX 5600M GPUs. During its release, the brand revealed that it shifts power between the Radeon GPU and the Ryzen processor with the help of AMD SmartShift technology.

Besides, the laptop comes with 39.6 cm FHD IPS display panel, 51WHr battery, and a customizable red-backlit keyboard with WASD. And the price of G5 15 SE is 74,990 INR.

This new model has a metallic IMR finish. Among all four new laptops, G5 15 is the portable laptop. Besides, it is 21.6mm in length and contains up to 10th Generation Intel Core i7 processors.

The most popular feature of this laptop is that it comes with a dual-fan cooling technology and large cooling vents. It is an important feature for gamers. So while playing high-quality games, it can spread out the heat and function smoothly. If you are planning to buy a gaming PC, make sure to check out this model, which comes with 1650Ti graphics. We guarantee that it will give you the best gaming experience. G5 15 is a bit costlier than other G series laptops, which is 82,590 INR. 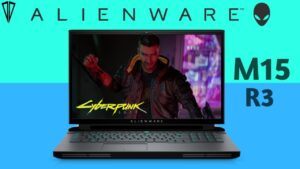 The M15 R3 is one of the most popular models in Alienware. It is lightest, thinnest, and offers great performance. Also, it is the most powerful 39.6 cm model. Dell says that its main target customers are gamers. It contains advanced Tobii Experience, which is created for eye tracking for competitive gaming. The price of the m15 R3 is 1,99,990 INR.

Revisit this website to find awesome updates about Alienware and G series laptops.